Greek Prime Minister Kyriakos Mitsotakis and the heir to the throne of the United Arab Emirates, Sheikh Mohammed bin Zayed Al Nahyan, affirmed their common stance in Abu Dhabi Wednesday against Turkish aggression in the eastern Mediterranean, the Middle East and the Caucasus.

The two countries issued a joint declaration and signed a defence and foreign policy cooperation agreement along the lines of accords drawn up twice in the last decade between Abu Dhabi and Paris.

The framework of the Greece-UAE cooperation will be ensured through the participation of Abu Dhabi as an additional partner (+1) in some tripartite schemes down the line. In addition, the more frequent stationing of UAE forces in Greece and joint training are expected.

The joint statement of the two leaders on Wednesday stated that their governments condemn Turkey’s violation of the sovereignty and sovereign rights of Greece and Cyprus, as well as its overall aggressive behaviour in the Middle East, the eastern Mediterranean and the South Caucasus, in clear violation of international law. They also noted the obligation of states to refrain from the threat or use of force as provided by the Charter of the United Nations.

In this spirit, the two governments called on Turkey to respect international law and to immediately cease all its illegal and provocative actions. Moreover, Greece pledged in the declaration to play a constructive role, contributing to the strengthening of historical and friendly ties between the UAE and the European Union. The two leaders also described trade, investment, tourism, culture, energy, digital and government services and agriculture as pillars of bilateral cooperation.

Meanwhile, in his message to the 66th Annual Session of the NATO Parliamentary Assembly, Mitsotakis stressed that Turkey’s overall behaviour is jeopardising the Alliance’s interests.

More specifically, he referred to Turkey’s cooperation with jihadist groups and its testing of Russian-made S-400 weapons systems, which, he stressed, undermine NATO’s values, solidarity, cohesion, unity and effectiveness.

(This article was originally published by Kathimerini newspaper and is reproduced by permission.) 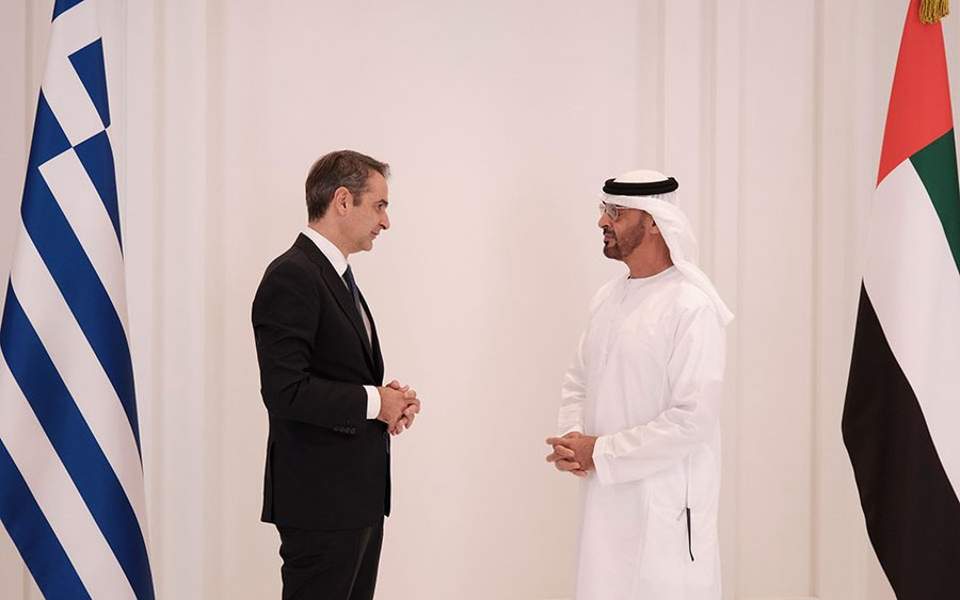 Prime Minister Kyriakos Mitsotakis and the heir to the throne of the United Arab Emirates, Sheikh Mohammed bin Zayed Al Nahyan, affirmed their common stance Wednesday against Turkish aggression in the Eastern Mediterranean, the Middle East and the Caucasus.